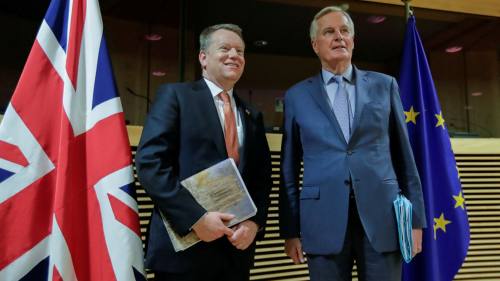 After one week of intense trade negotiations in London, the chief negotiators from Britain and the European Union (EU) agreed Friday to “pause the talks” due to “significant divergences.”

Releasing identical statements on Twitter, Britain’s chief Brexit negotiator David Frost and his EU counterpart Michel Barnier said they agreed that “the conditions for an agreement are not met, due to significant divergences on level playing field, governance and fisheries.”

The two sides “agreed to pause the talks in order to brief their Principals on the state of play of the negotiations,” said the statement.

Britain and the EU resumed face-to-face talks in London on Nov. 28 after an EU negotiator tested positive for coronavirus earlier in November.

The negotiations are at a crucial stage as time is running out for both sides to secure a deal before the Brexit transition period expires at the end of 2020.

Failure to reach a free trade agreement with the EU means bilateral trade will fall back on World Trade Organization rules in 2021, which may lead to disruptions to both economies that have already been brought low by the COVID-19 pandemic.

France in particular has expressed that if there was a deal and it wasn’t good, “every country has a right to veto,” said French Minister for European Affairs Clement Beaune, as quoted by local broadcaster.

British Prime Minister Boris Johnson’s official spokesman told media that it is certain that they will not agree a deal that does not respect their “fundamental principles on sovereignty.”