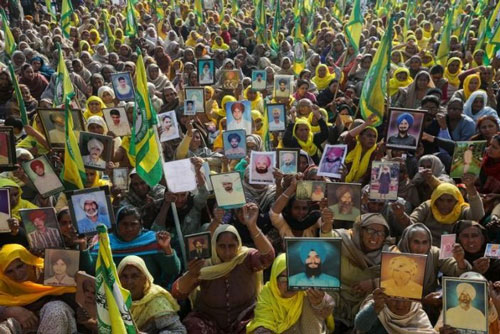 Prime Minister Narendra Modi on Friday defended India’s biggest farm reforms in decades but offered to “very humbly” hold further talks with farmers protesting against the laws they fear would erode their incomes.
Tens of thousands of farmers have blocked roads leading into New Delhi for the past three weeks demanding a repeal of laws that give them the option to sell directly to private companies.
The government says the change is necessary to boost farm returns and improve storage and other infrastructure.
But the farmers, mainly from the northern agrarian states of Punjab and Haryana, fear private companies would eventually dictate terms and the government would stop buying grains like wheat and rice from them at a minimum guaranteed price.
In online remarks to farmers of the country’s biggest wheat-producing state, Madhya Pradesh, Modi said there should be no cause for concern and repeated the government’s position that farmers would be assured of a price like earlier.
“The modern facilities available to the farmers of major nations should also be available for those from India, it cannot be delayed any longer,” he said.
“Still, if anyone has any apprehension, and in the interest of the farmers of the country and to address their concerns, we are very humbly ready to talk on every issue.”
His comments came as farmers, many in their sixties or above, brave north India’s harsh winter to camp out in the open on Delhi’s borders with their tractors and trailers parked bumper to bumper.
After a series of previous meetings with Modi’s ministers, the protesters have said that nothing short of an official annulment of the three laws will be enough to change their position.
Rakesh Tikait, a farmers’ leader, said after Modi’s speech that the premier was trying to privatise agriculture to benefit companies and not them.
Hundreds of Indian women, including many widows of farmers who were believed to have killed themselves over debt, joined a protest against government reforms that farmers say threaten their livelihoods.
Farmers have been protesting for nearly a month over the reforms, enacted in September, to deregulate the agriculture sector, allowing farmers to sell to buyers beyond government-regulated wholesale markets.
Small farmers fear the changes will mean the end of guaranteed minimum prices for their crops and leave them at the mercy of big retailers.
“If these black laws come, more farmers will go deeper into debt,” said 40-year-old Harshdeep Kaur, a widow from Punjab state, at one protest site on the outskirts of the capital, New Delhi.
“More mothers and sisters will become widows like me.”
Suicide by struggling farmers has been a problem in India for years.
Nearly 10,350 farmers and agricultural labourers committed suicide in 2018 – making up almost 8% of all suicides in India, according to the National Crime Records Bureau.