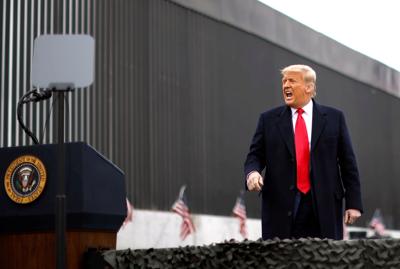 WASHINGTON: A week after President Donald Trump’s supporters stormed the US Capitol, the US House of Representatives will vote on Wednesday to impeach the president for his role in an assault on American democracy that stunned the nation and left five dead.

At least five Republicans have said they would join Democrats to impeach Trump for the second time, just seven days before he is due to leave office and President-elect Joe Biden is sworn in on Jan. 20.

A vote of the House majority to impeach would trigger a trial in the still Republican-controlled Senate, although it was unclear whether such a trial would take place in time to expel Trump from the White House.

Democrats moved forward on an impeachment vote after Vice President Mike Pence rejected an effort to persuade him to invoke the 25th Amendment of the US Constitution to remove Trump.

“I do not believe that such a course of action is in the best interest of our Nation or consistent with our Constitution,” Pence said in a letter Tuesday evening to House Speaker Nancy Pelosi.

Despite the letter, the House passed a resolution late Tuesday formally calling on Pence to act. The final vote was 223-205 in favor.

As the House prepared for the impeachment vote on Wednesday, there were signs that Trump’s once-dominant hold on the Republican Party was beginning to ebb.

At least five House Republicans, including Liz Cheney, a member of her party’s leadership team, said they would vote for his second impeachment – a prospect no president before Trump has faced.

“There has never been a greater betrayal by a President of the United States of his office and his oath to the Constitution,” Cheney, the daughter of former Vice President Dick Cheney, said in a statement.

Trump “summoned this mob, assembled the mob, and lit the flame of this attack” on the Capitol, she said.