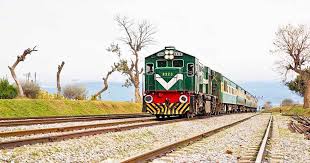 Tourist train will take tourists from Golra station to Hassan Abdal, Attock Khurd and Attock City and surrounding areas every Friday, Saturday and Sunday. The safari train will also pass through the old iron girder bridge, which is the most important, strategic and commercial cross on the Indus between Punjab and Khyber-Pakhtunkhwa.

Addressing the media persons at the inauguration, Chairman Senate said that this safari train was an important step towards promotion of tourism in the country. Railways were backbone of the economy, he added.

He said that the concept of safari train was good; it could be a source of entertainment and tourism. He said that such trains should also be run from different cities as it could play a key role in promoting tourism.

The chairman said that Railways should take such steps to make the institution profitable and help in projecting a positive image of the country. “At one time, fresh water was also delivered by railway from Quetta to my village” he added.

He said that promotion of tourism was responsibility of every individual.

He said that the development of any country was linked with the tourism.

Minister for Railways Azam Swati said on the occasion that the objective of the train was to project the culture, civilization, heritage and worth seeing beautiful places of Pakistan before the world.