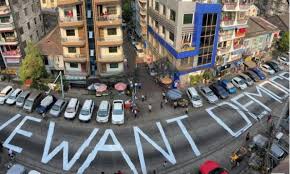 Tens of thousands of opponents of Myanmar’s February 1 military coup gathered on Sunday in towns from north to south, undeterred by the bloodiest episode of their campaign the previous day when security forces opened fire on protesters, killing two.

Early on Sunday, police arrested a famous actor wanted for supporting opposition to the coup, his wife said, while Facebook deleted the military’s main page under its standards prohibiting the incitement of violence.

The military has been unable to quell the demonstrations and a civil disobedience campaign of strikes against the coup and the detention of elected leader Aung San Suu Kyi and others, even with a promise of a new election and warnings against dissent.