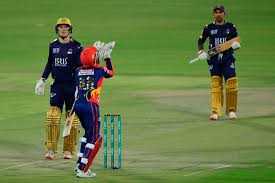 The sixth edition of the Pakistan Super League has been postponed after a spate of positive Covid-19 tests – as many as seven players or officials have now returned positive tests in less than a week. Last season, as the pandemic began, the league had to cut short its fifth season, although it rescheduled the remaining matches and staged them in November 2020. This season has seen instances gradually build before the dramatic events of today eventually forced the tournament to be suspended, with less than half of its 34 games completed. Here is a timeline of how events came to a head.