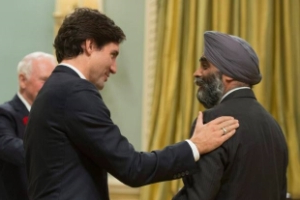 Prime Minister Justin Trudeau said today he still has confidence in his defence minister despite the ongoing sexual misconduct scandal in the Canadian military — and despite testimony from a former ombudsman claiming Defence Minister Harjit Sajjan mishandled concerns about possible misconduct by Gen. Jonathan Vance.

The prime minister also insisted again today that he did not know about allegations of inappropriate behaviour by the former chief of the defence staff until they were reported a month ago in the media.