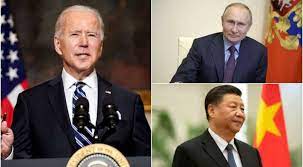 president Joe Biden has invited his counterparts Xi Jinping of China and Russia’s Vladimir Putin to a virtual climate summit he is hosting in April, the White House announced Friday.

In all, 40 world leaders have been asked to attend the two-day meeting meant to mark Washington’s return to the front lines of the fight against man-made climate change, after former president Donald Trump disengaged from the process