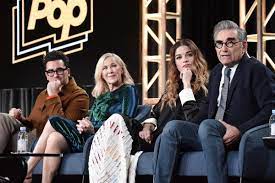 Well into its third year of topping awards shows, comedy Schitt’s Creek led the nominations for this year’s Canadian Screen Awards with 21 nods.

The show, which saw its sixth and final season run last year, also topped the CSA nominations list in 2020 and shared the honour with Anne with an E in 2019. It swept the comedy category at the Emmys in September, and last month won the Golden Globe for best comedy while star Catherine O’Hara took home the award for best actress.