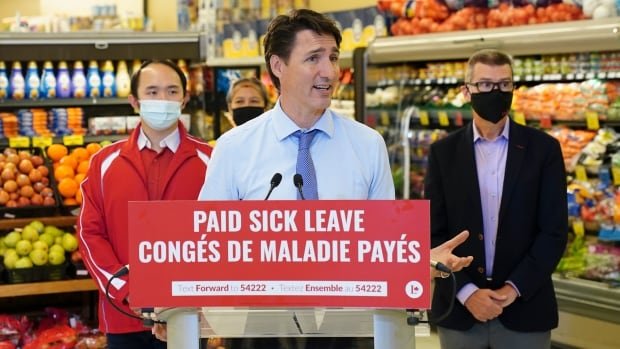 Liberal Leader Justin Trudeau continued his push to make mandatory vaccination an election issue Friday calling the Conservative opposition to such a regime “irresponsible” and “dangerous,” while urging the party to mandate that all of their candidates get a shot.

Speaking to reporters at a campaign stop in Winnipeg, where he announced new sick pay benefits, Trudeau said “protecting Canadians is job one of the government,” and Conservative Leader Erin O’Toole’s pledge to make the unvaccinated take rapid tests rather than shots is a “mistake” that threatens public health.

In his strongest rhetoric to date, Trudeau said Canada “can’t afford the Conservative party’s approach that denies science and peddles disinformation on public health measures.” Trudeau did not mention any specifics.

“And let’s not even get started on vaccines. Scrapping our commitment to make sure everyone on a plane or a train is vaccinated? That’s not just irresponsible. That’s dangerous,” Trudeau said.

Trudeau said vaccine holdouts, like those in the Conservative fold, are putting children at risk. With COVID-19 shots currently restricted to people 12 and older, Trudeau said “adults need to do their part and go get vaccinated to keep kids safe” as summer break comes to a close.