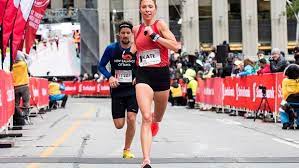 Growing up with three brothers, Kate Bazeley often found herself in the middle of a game or sport since everything was a competition, from completing the crossword on the back of a cereal box to playing soccer or the board game Risk.

“I was never afraid to jump in and participate and tried my best to win, whatever it was we were doing,” she recalled in a phone interview with CBC Sports. “I always loved a challenge and never backed down, so I learned from an early age to embrace it, find joy in it and be grateful to be able to compete.”

Bazeley “fell into” running in her late teens, performed well and soon began travelling from her native St. John’s to Canada Running Series events since they offered support and helped athletes succeed.

Nearly 20 years later, the elite distance runner is set to compete in her first World Marathon Major on Sunday at 8:30 a.m. ET in Chicago, where the 37-year-old mother of three daughters will be among about 35,000 participants in the 43rd running of the event.

It will mark Bazeley’s fourth marathon and first since Oct. 20, 2019 in Toronto, where she placed fourth among Canadian women in a personal-best two hours 36 minutes 35 seconds.

“I’m definitely in better shape than that,” she said, “so if everything goes even all right, I should come away with a nice PB. My coach [retired Olympic marathoner] Jon Brown and I are thinking 2:30 to 2:32.