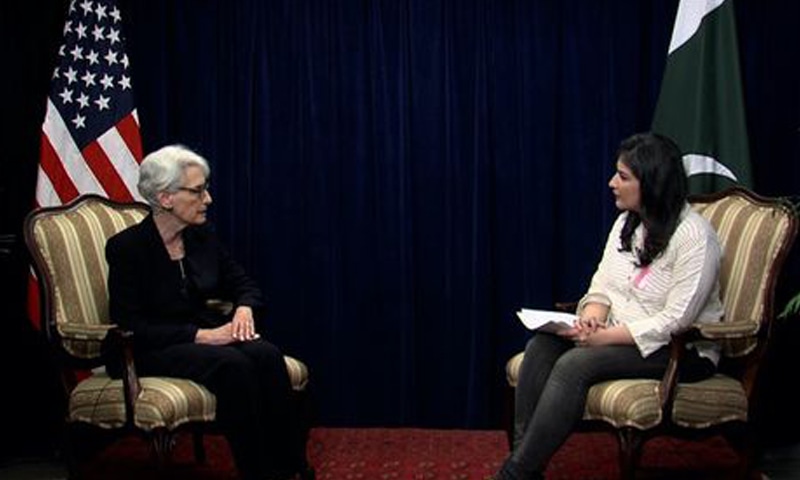 US Deputy Secretary of State Wendy Sherman on Friday expressed appreciation for Pakistan’s efforts to provide humanitarian assistance to Afghanistan, saying that it should be “very proud of 42 years of helping Afghan refugees” and the US, as well as the world, was grateful for that.

Sherman, who is leading a US delegation on a visit to Pakistan, lauded Pakistan’s role in this regard during an exclusive interview on PTV News programme ‘Shahrah-e-Dastoor’.

In response to a question, she said she had visited a United Nations High Commissioner for Refugees Documentation Renewal and Information Verification Exercise centre here earlier in the day, where registration cards were being issued for Afghan refugees so that they could have access to facilities such as healthcare in Pakistan.

“It is an extraordinary system,” she said, commending Pakistan for persistently helping Afghan refugees over a long period of time.

Sherman was also asked about her comments about relations between the US and Pakistan during her visit to India.

“It’s for a very specific and narrow purpose, we don’t see ourselves building a broad relationship with Pakistan,” she had said, according to Indian publication The Indian Express.

In response to the question, Sherman clarified that by “specific steps” she meant that the purpose of her trip to Pakistan was to predominantly focus on the aftermath of events in Afghanistan and review bilateral relationships between the US and Pakistan.

“The US and Pakistan have had longstanding relations for decades,” she said.

She went on to say that “this is a time of great change in [this] region because of the events in Afghanistan”, and the US and the world were reassessing what the future would look like and how to ensure a better future for Afghans and ensure that no country remained a safe haven for terrorists.

Sherman also assured that the US was willing to engage with Pakistan on “the wide-ranging agenda we have” and and the aftermath of recent events in Afghanistan.

She added that the US was glad that Pakistan had called for an inclusive government in Afghanistan and progress on this front should be made so as to “create a better life for the people of Afghanistan”.

“And we also agree that humanitarian assistance [to Afghanistan] should continue,” Sherman said, sharing details of measures taken by the US for this purpose.

‘We don’t ask countries to choose between US, China’
When asked about the Quad, a recently formed group that includes India, the US, Japan and Australia as members and perceived to be an alliance against China in the region, Sherman described it as a “cooperative effort” on matters such as energy and people-to-people exchange.

In this connection, she also clarified that the US didn’t ask countries to choose between itself and China.

Acknowledging that China was a large economy and growing world power, she added, “What we do ask is that China plays by rules” in the international order.

“We urge countries to insist on that so that everyone has a level-playing field”.

When she was asked about America’s stance on the Kashmir dispute, Sherman said she realised that it was a long-standing, complex and historical issue, but “it is between India and Pakistan”.

The US would urge for dialogue on the matter, she added.