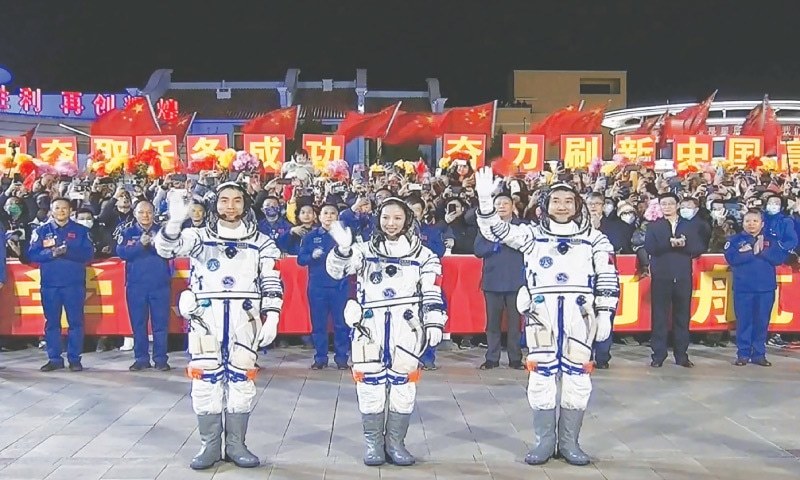 BEIJING: China on Saturday launched a three-person crew for a six-month mission aboard its space station that is planned at setting a new record for the length of time spent in space by Chinese astronauts as the country moves toward completing the orbiting structure.

The Shenzhou-13 spaceship carrying the three astronauts was launched by a Long March-2F rocket at 12:25 a.m. Saturday.

It is expected to complete docking with the Tianhe module within the next six hours, beginning the mission that will continue the work of the first three-person crew that spent 90 days aboard. Those crew members conducted two spacewalks and deployed a 10-metre mechanical arm before returning to Earth in mid-September.

The new crew includes two veterans of space travel. Pilot Zhai Zhigang, 55, and Wang Yaping, 41, the only woman on the mission, and Ye Guangfu, 41, who is making his first trip to space.

The crew was seen off by a military band and supporters singing Ode to the Motherland, underscoring the weight of national pride invested in the Chinas space programme that has advanced rapidly in recent years.

The crews scheduled activities include up to three spacewalks to install equipment in preparation for expanding the station, assessing living conditions in the module and conducting experiments in space medicine and other fields.

Chinas military-run space programme plans to send multiple crews to the station over the next two years to make it fully functional. Shenzhou-13 is the fifth mission to the structure, including trips without crews to deliver supplies.

When completed with the addition of two more modules named Mengtian and Wentian the station will weigh about 66 tons, a fraction of the size of the International Space Station, which launched its first module in 1998 and will weigh around 450 tons when completed.