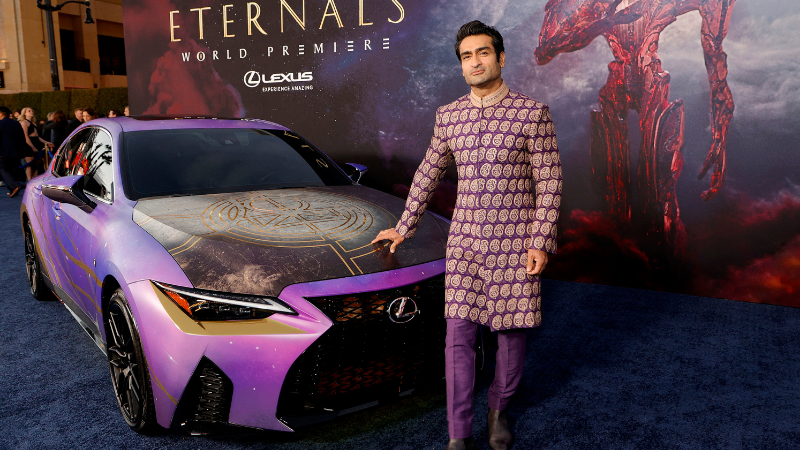 Kumail Nanjiani, the first Pakistani actor to enter the Marvel Cinematic Universe (MCU), recently set our hearts ablaze with his red carpet look for the Eternals premiere in Los Angeles on October 18. The actor stayed true to his roots with his fashion choices.

Nanjiani — who is playing superhero Kingo in the movie — asked his mother, Shabana, to help him pick the perfect outfit for the premiere. According to The Hollywood Reporter, Nanjiani’s mind was set on wearing a traditional sherwani. “I wanted to wear a sherwani because 1. They look awesome and 2. My costume in the film always reminded me of sherwanis,” he said. “And I wanted to use a designer in Pakistan, not just a Pakistani designer in the US So I called my mum, she gave me names of three amazing designers in Pakistan.”

Nanjiani’s stylist Jeanne Yang connected to Pakistani designer Umar Sayeed via Instagram. The couturier was shown the actor’s on-screen costume, meant to be the ultimate inspiration for his red carpet look. “I wanted the colours to be similar to my costume colours,” Nanjiani told the publication. “Purple and gold are a beautiful combination. The paisley pattern is very traditional as well.”

Nanjiani’s purple sherwani looked pretty regal and Mughal-like. Yang shared how Umar Sayeed “hand-beaded this beautiful paisley pattern in the front”. “They did this beautiful pattern on the back with gold thread,” she said. The sherwani was made to Nanjiani’s exact measurements and only needed a few minor adjustments later on.

Umar Sayeed shared the pictures of Nanjiani wearing his bespoke creation to the red carpet on his Instagram as well. Talking about the red carpet outfit, the brand said they were “very humbled and excited” to see Nanjiani in their creation. “It was a pleasure working with him and his team,” they said.