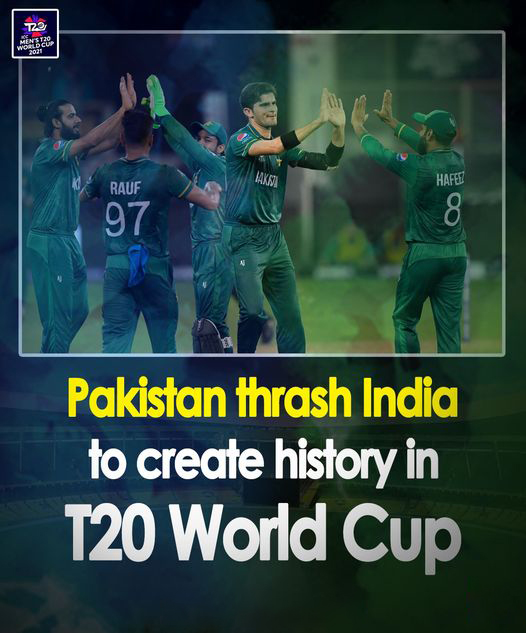 DUBAI: Pakistan on Sunday claimed its first T20 World Cup victory against India after defeating it by 10 wickets.

India had set up a 152-run target for Pakistan after Babar Azam had decided to field first.

Pakistan openers Babar Azam and Mohammad Rizwan established a firm partnership throughout the second innings as they smoothly chased the target to clinch a victory for team green.

In the first innings, the Men in Green claimed their seventh wicket sending off Hardik Pandya and restricting the arch-rivals for 151 runs.

In a stunning display, Shaheen Afridi sent Virat Kohli, who took charge of India’s resurgence, off for 57 runs in turn claiming the sixth and crucial wicket for Pakistan.

Pakistan’s fifth dismissal was through Hasan Ali who sent Ravindra Jadeja back to the pavilion.

Shaheen Shah Afridi struck early to claim two wickets for Pakistan against arch-rival India in the Super 12 match of the T20 World Cup on Sunday.

The Pakistani pacer sent opener Rohit Sharma back to the pavilion after he managed to score only one run. He was replaced by skipper Virat Kohli.

Afridi claimed another wicket of K Rahul as he departed for just three runs. Suryakumar Yadav replaced Rahul in the ground.