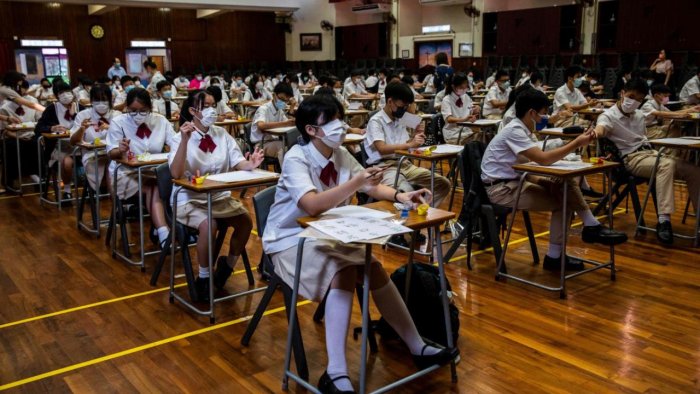 BEIJING: China passed a law on Saturday to limit the pressure on children from homework and after-school tutoring, state media said, as the country reforms its ultra-competitive education system.

The government has imposed several rules in recent months aimed at combating activities it considers harmful to the development of China’s youth.

Beijing has already banned minors from playing online games for more than three hours a week in an effort to tackle addiction. It has also launched a crackdown on private tutoring companies, ordering them to go non-profit.

Local authorities will be told to “strengthen their supervision in order to reduce the burden on students in terms of homework and extra-curricular lessons”, said news agency Xinhua, citing a law passed by the Chinese legislature.

“Parents… must allocate in a reasonable way for minors the time devoted to studies, rest, entertainment and physical activity in order not to increase their learning load and to avoid any internet addiction.” The law will come into force on Jan 1 next year.

China’s exam-oriented education system requires students to take exams from an early age and culminates in the feared university entrance exam at age 18 known as the “gaokao”, where a single score can determine a child’s life trajectory. Many parents spend a fortune to enrol their children in the best schools or private lessons, which takes a toll on both their finances and the health of the youngsters.

Reducing the pressure on parents is also seen as a way to encourage Chinese people to have more children as the country’s population ages.

The top decision-making body of the Chinese parliament said on Saturday it will roll out a pilot real estate tax in some regions, the official Xinhua news agency reported.

The State Council, or Cabinet, will determine which regions will be involved and other details, Xinhua added. The long-mooted and long-resisted property tax has gained new momentum since President Xi Jinping threw his support behind what experts describe as one of the most profound changes to China’s real estate policies in a generation.

A tax could help red-hot home prices that have soared more than more than 2,000pc since the privatisation of the housing market in the 1990s and created an affordability crisis in recent years.

But talk of the plan is coming at a sensitive time, as the property market is showing significant signs of stress and home prices have started falling in tens of cities.

The tax will apply to residential and non-residential property as well as land and property owners, but does not apply to legally owned rural land or where residences are built on it, Xinhua said.

The pilot schemes will last five years from the issue of the details from the State Council. The idea of a levy on home owners first surfaced in 2003 but has failed to take off due to concerns that it would damage property demand, home prices, household wealth and future real estate projects.

It has faced resistance from stakeholders including local governments, who fear it would erode property values or trigger a market sell-off. Over 90pc of households own at least one home, the central bank said last year. But analysts say the tax will bring in much needed revenue.

“Land sales are not a sustainable source of government revenue any more,” Capital Economics said in a note on Friday.