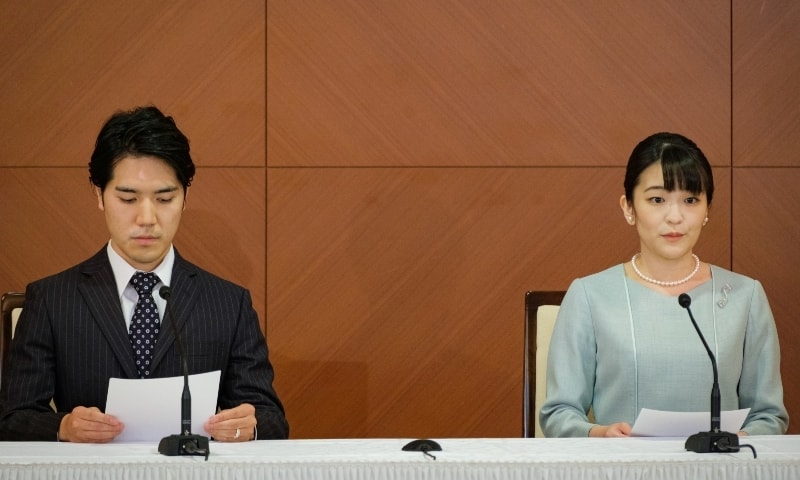 Japan’s Princess Mako married her university sweetheart on Tuesday, but it was a low-key union bereft of traditional rituals, with the couple voicing sadness over the controversy that haunted their engagement.

Under the rules of the imperial family, Emperor Naruhito’s 30-year-old niece Mako gave up her royal title as she wed Kei Komuro, who is the same age and works for a US law firm.

“To me, Kei is irreplaceable. Our marriage is a necessary step for us to be able to protect our hearts,” she told reporters after the marriage was registered.

“I have been scared, feeling sadness and pain whenever one-sided rumours turn into groundless stories,” she added as the newlyweds read out rehearsed statements in a soberly decorated hotel function room.

Since announcing their engagement in 2017, the couple has faced tabloid scandals and vicious online sniping over allegations that Komuro’s family had run into financial difficulties.

After much delay, they finally tied the knot with no wedding ceremony, reception banquet or any of the usual rites — opting to do so privately, away from a public that has not always been kind.

Mako also turned down a large payment usually offered to royal women on their departure, reportedly up to $1.35 million and they are now said to be planning a move to the United States.

Royals are held to exacting standards in Japan, and Mako has developed complex post-traumatic stress disorder because of the media attention, according to the Imperial Household Agency.

“I love Mako. We only get one life, and I want us to spend it with the one we love,” Komuro said.

“I feel very sad that Mako has been in a bad condition, mentally and physically, because of the false accusations.”

The couple did not answer questions from reporters verbally, to make the experience less stressful for Mako, the household said.

But in a document given to reporters, she said her condition was “not good”.

‘Regrettable’ situation
Women in the imperial family cannot ascend the Chrysanthemum Throne, and lose their royal status when they marry a commoner.

A household official told AFP the marriage papers had been “filed and accepted” after TV footage showed Mako leaving the Akasaka Imperial Residence in the morning.

The princess, holding a small bouquet of pale pink flowers, bid farewell to her family — bowing to her parents and the press and hugging her sister.

Despite the negative press coverage and vicious online sniping, many Japanese say they support the marriage.

“The most important thing is that she is happy,” said Tokyo resident Machiko Yoshimoto, in her 60s.

“Certainly, it would have been better to have a festive atmosphere, instead of this difficult situation, which is rather sad and regrettable,” Shigehiro Hashimoto, 54, told AFP.

In a survey by the Yomiuri Shimbun daily, more than half of respondents said they thought the marriage was a good thing, against 33 per cent who did not.

When the pair got engaged, they were all bashful smiles as Komuro called Mako “the moon” quietly watching over him, and she compared his smile to the sun.

But while Japanese media initially fawned over Komuro, reports soon emerged that his mother had failed to repay a 4m yen loan from a former fiance.

The couple postponed their marriage and he moved to New York for law school in 2018, a move seen as a bid to defuse negative attention.

The recent graduate only returned to Japan last month, sporting a headline-grabbing ponytail.

Their reported plan to live in the US has drawn inevitable comparisons with another royal couple who have faced a media onslaught: Britain’s Prince Harry and Meghan Markle.

It is not clear if Mako will work once there, but she is well qualified, having studied art and cultural heritage at Tokyo’s International Christian University. She also holds a Master’s degree from Britain’s University of Leicester.

Tuesday’s muted proceedings stood in contrast to those of another royal to marry out of the family: Ayako, the youngest daughter of former emperor Akihito’s late cousin.

At her wedding in 2018, she wore a crimson kimono robe for female aristocrats, with her hair swept back in a ponytail in a traditional style.

The Japanese throne can pass only to male members of the family, and the children of female royals who marry commoners are not included.

There has been some debate over changing the rules, and a government panel in July compiled notes on the issue including a proposal that royal women stay in the family, even after marriage.

Although polls show the public broadly support women being allowed to rule, any change is likely to be slow, with traditionalists vehemently opposed.