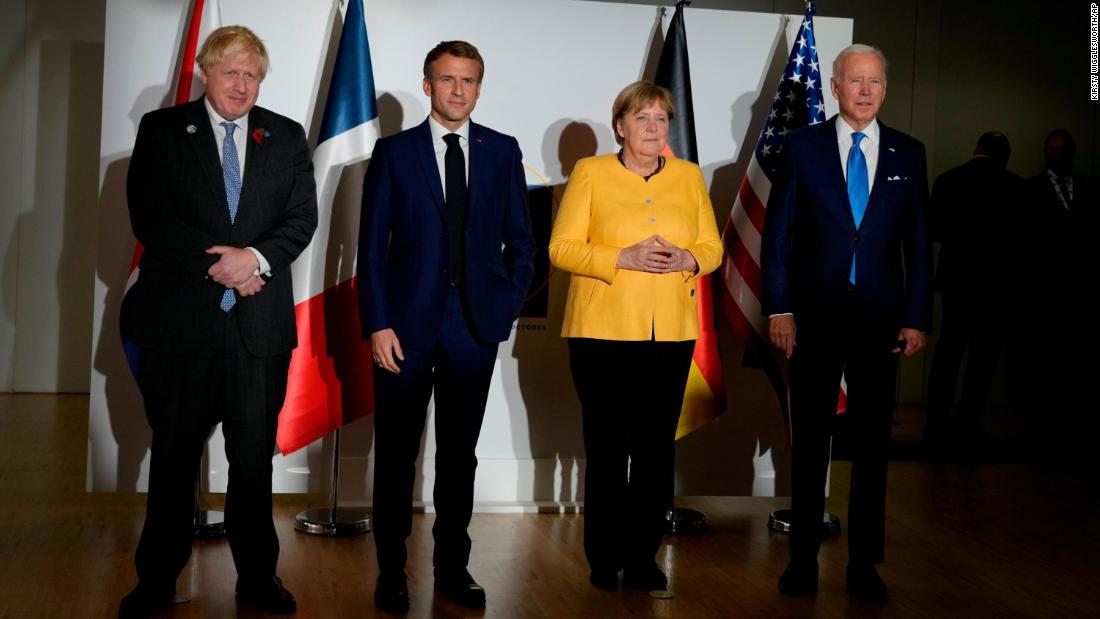 British Prime Minister Boris Johnson, French President Emmanuel Macron, German Chancellor Angela Merkel, and U.S. President Joe Biden, from left, pose for the media prior to a meeting on Saturday at the La Nuvola conference center for the G20 summit in Rome. (AP Photo/Kirsty Wigglesworth, Pool)
(CNN)President Joe Biden and three of his European allies said in a joint statement on Saturday that they’re sure that the Iran nuclear deal can be restored despite talks stalling out over the summer.

In a joint statement that came following a discussion between Biden, United Kingdom Prime Minister Boris Johnson, French President Emmanuel Macron and German Chancellor Angela Merkel at the G20 in Rome, the leaders said they are “convinced that it is possible to quickly reach and implement an understanding on return to full compliance” of the Iran nuclear deal.
The meeting came one day after the US imposed new sanctions on Iran related to its drone program and less than a week after Tehran announced it would return to nuclear talks in Vienna with following a four-month hiatus.
The Iran nuclear deal, known officially as the Joint Comprehensive Plan of Action, was abandoned by the US under the Trump administration. And talks to resurrect the deal in Vienna were suspended in late June after six rounds between Iran, China, Germany, France, Russia, the United Kingdom and — indirectly — the United States.
According to the joint statement, the leaders “agreed that continued Iranian nuclear advances and obstacles to the IAEA’s work will jeopardize the possibility of a return to the JCPOA.” However, the statement added, “We are convinced that it is possible to quickly reach and implement an understanding on return to full compliance and to ensure for the long term that Iran’s nuclear program is exclusively for peaceful purposes.”
The leaders said Iran’s return to compliance would “provide sanctions lifting with long-lasting implications for Iran’s economic growth.”
“This will only be possible if Iran changes course,” the leaders wrote, addressing Iran’s new hardline leader: “We call upon President (Ebrahim) Raisi to seize this opportunity and return to a good faith effort to conclude our negotiations as a matter of urgency. That is the only sure way to avoid a dangerous escalation, which is not in any country’s interest.”
US officials previously indicated they want the US to return to the negotiating table at the end of November. But the negotiators selected by Iran’s new hardline leadership openly oppose the nuclear deal, leaving little optimism in Washington.
Just prior to the meeting, when a reporter asked whether Biden wanted stalled negotiations with Iran to restart, the President said: “They’re scheduled to resume.”
White House officials had previously suggested there wasn’t one particular objective for the meeting. Instead, they said the meeting was an attempt to sort out next steps and ensure all parties are on the same page.
“(T)he main purpose of the four of them getting together — this was actually a Merkel initiative — is we are at a critical moment, and these four leaders have not actually had the chance to sit and talk about Iran,” a senior administration official told reporters on Friday. “And they need to have private space to have the, you know, the no-B.S. conversation about where we’re at and where we need to go.”
The official called the meeting “a serious opportunity to check signals as we head into a really vital period on this issue.”
US officials are highly skeptical that renewed talks over how to handle Iran’s nuclear program will yield the desired results and are actively discussing imposing penalties on Tehran.
Sources in Washington told CNN there is an ongoing debate within the Biden administration about how to proceed and how much to increase the pressure on Iran.
One person familiar with discussions told CNN that Biden was expected to discuss potential options during his G20 meetings with allies and that those costs could be imposed even as the Iran talks are underway.
However, they said the US and its allies are now more willing to impose a higher cost on Iran for failing to come to an agreement if Tehran continues to take actions that are inconsistent with the 2015 nuclear deal and bring it closer to developing a nuclear weapon.
A European diplomat said that Tehran’s willingness to restart talks is “not a solution, but it is a reasonably significant step forward.” This diplomat and others had seen Iran’s delay in returning to the talks in Vienna as a stalling tactic while the country continued to develop its nuclear program. Now, there is broad discussion about “pushing up the pressure” on Iran, this diplomat said.
CNN’s Kylie Atwood, Nicole Gaouette and Jennifer Hansler contributed to this report.