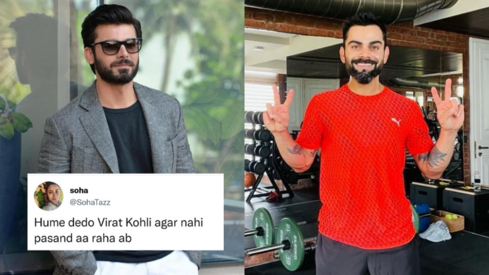 There’s no denying that Indian cricket captain Virat Kohli seems to have it all — mad talent in cricket, smouldering good looks and well, Anushka Sharma as a partner. So when Pakistani Twitter saw the opportunity to get their hands on Kohli, they went after it and it looks like Indian Twitter is ready to give him to us in exchange for a few of our own coveted celebrities.

Kohli recently lashed out at “the spineless people” who abused Indian bowler Muhammad Shami after the Indian cricket team lost a match to Pakistan in the ICC Men’s T20 World Cup. Kohli has since been the target of malicious online trolling himself. He’s been criticised for backing Shami as well as India’s below average performance in the T20 World Cup. According to NDTV, a rape threat against the cricketer’s nine-month-old daughter also surfaced online.

Many on Pakistani Twitter were not happy with the treatment Kohli has recently received and one Twitter user asked that he be handed over to Pakistan if Indians didn’t want him anymore.