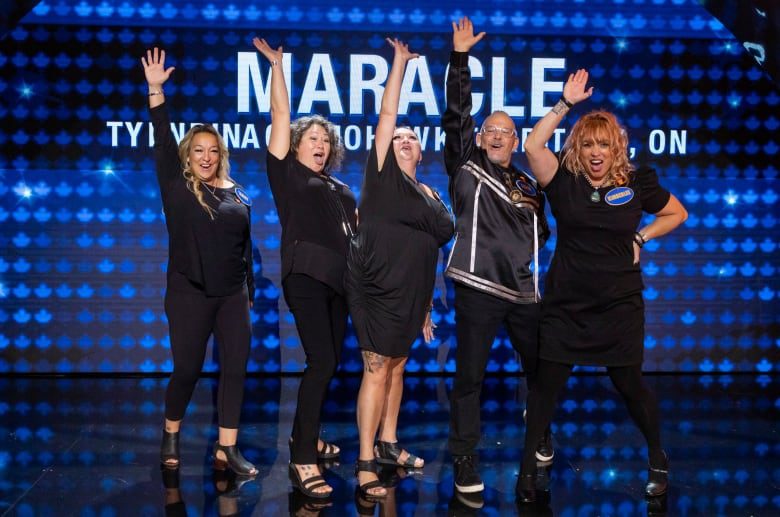 From the hearty laughs of aunties to talking about lacrosse, two First Nations families say they are proud to show off their humour while highlighting important issues on the newest season of Family Feud Canada.

“It was just our duty to bring out our culture,” said Joshua Lynxleg, a contestant on an upcoming episode.

Lynxleg, who is Anishinaabe from Tootinaowaziibeeng First Nation in Manitoba, about 300 kilometres northwest of Winnipeg, signed his family up for the show on a whim.

The episode they recorded in Toronto is set to air on CBC-TV Nov. 8.

Photos of the Lynxleg family all wearing ribbon skirts and big earrings sparked interest about the episode on social media.

“My friend Susan Guimond made the ribbon skirt especially tailored to me. We went to the fabric store and of course bought the gayest, most glittery fabric there was,” said Lynxleg, who identifies as two-spirit.

He said the family, all cousins, agreed beforehand to wear shirts with messaging on issues like land back, clean water, missing and murdered Indigenous women and girls and residential schools.

“That’s just the way of life for us,” said Lynxleg.

His cousin Whitney Lynxleg said being on the show with family members was one of the most amazing experiences she has ever had.

“I feel that it’s about time that we are in the forefront, in the spotlight, especially with everything happening. Like, we’re waking up as people and we’re also waking up everyone else. And I was just so proud,” she said.

She said Canadians who watch the show will get a glimpse of their humour.

“We’re very humorous. We’re a very accepting, loving culture. And they should be more like us,” she said.