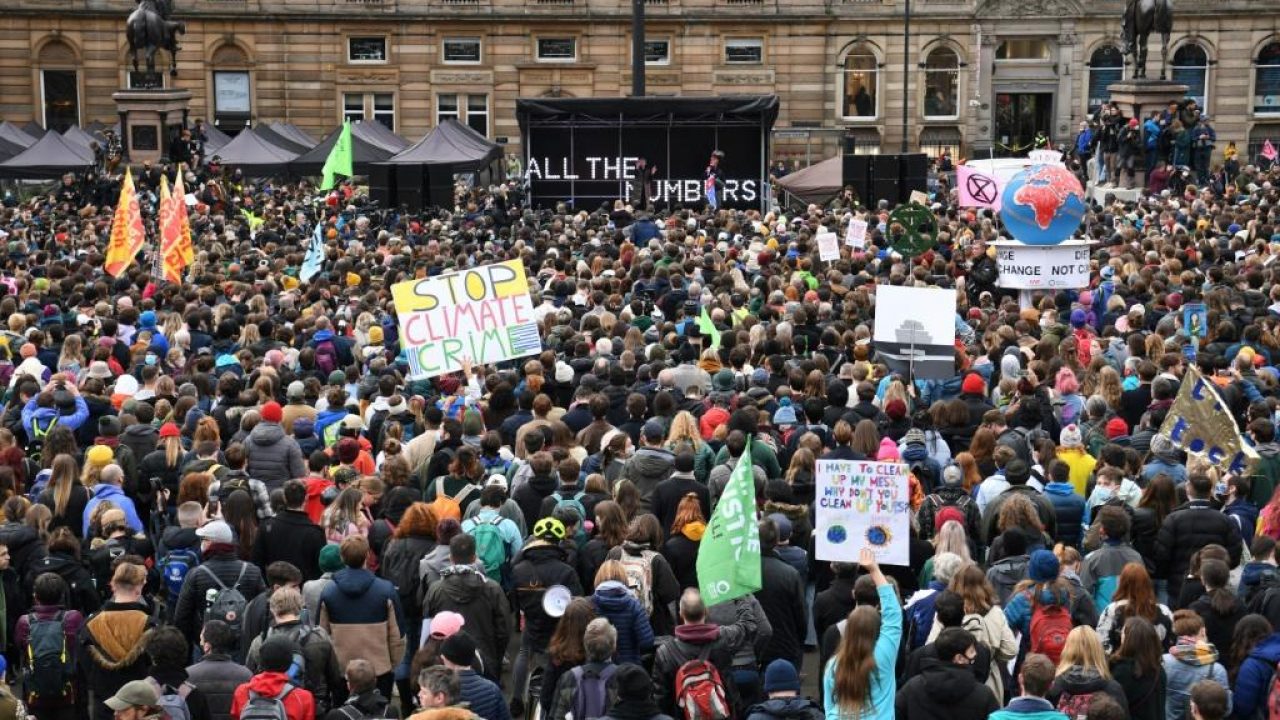 From Paris to Sydney, Nairobi to Seoul, dozens of events are planned worldwide to demand immediate action regarding climate change.
In Glasgow, organisers and police say they expect up to 50,000 people to parade through the streets.
Security has been boosted around Glasgow’s locked-down city centre ahead of the planned demonstrations there.

GLASGOW: Thousands of climate protesters braved rain and wind in Glasgow on Saturday to take part in worldwide demonstrations against what campaigners say is a failure of crunch UN talks to act fast enough to tame global warming.

Dozens of events are planned worldwide to demand cuts in fossil fuel use and immediate help for communities already affected by climate change, particularly in poorer countries.

In Glasgow, organisers and police said they ultimately expected up to 50,000 people to parade through the streets of the Scottish city.

Demonstrators began gathering on Saturday morning in a park near the COP26 summit venue, chanting: “Our world is under attack, stand up fight back!”

“I think a lot of politicians are scared of the power of this movement,” said a 22-year-old Norwegian protester who gave her name as Jenny.

Delegates from nearly 200 countries are in Glasgow to hammer out how to meet the Paris Agreement goals of limiting temperature rises to between 1.5 and 2 degrees Celsius.

At the halfway stage of the COP26 negotiations, some countries have upgraded their existing pledges to reduce greenhouse gas emissions, while there have been separate deals on phasing out coal, ending foreign fossil fuel funding, and slashing methane.

Widespread demos
The promises followed a pre-COP26 estimate from the UN that said national climate plans, when brought together, put Earth on course to warm 2.7C this century.

With just 1.1C of warming so far, communities across the world are already facing ever more intense fire and drought, displacement and economic ruin wrought by global heating.

And a major assessment last week showed global CO2 emissions were set to rebound in 2021 to pre-pandemic levels.

Swedish campaigner Greta Thunberg said the summit had gone nowhere near far enough in a speech at Friday’s youth march in Glasgow, where she labelled the conference “a failure”.

In Australia on Saturday, protesters in Sydney and Melbourne — some dressed as lumps of coal or Prime Minister Scott Morrison, a vigorous defender of the mining industry — echoed that sentiment, calling the talks “a sham” and their national leader “an absolute embarrassment”.