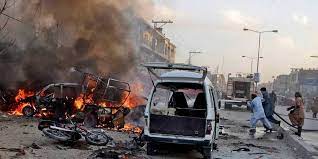 At least seven people, including a police official, were injured in a blast in Quetta’s Nawa Killi area on Saturday, Civil Hospital spokesperson Waseem Baig said.

Security forces and rescue officials rushed to the area following the explosion. The injured were transferred to Civil Hospital Quetta and the area was cordoned off, police officials said.

He added that three to four kilograms of explosive material, fitted to a motorcycle, was used in the blast, according to initial reports. The bomb was detonated via remote control, the SSP further said.

Balochistan Chief Minister Mir Abdul Qudoos Bizenjo condemned the attack and directed that the best medical treatment be provided to those injured.

“Subversive elements want to destroy the province’s peace. The protection of citizen’s lives and properties is our foremost priority,” he said in a statement.

“We will end the chaos of terrorism with the cooperation of the people,” he emphasised.

It was the second explosion in Pakistan. Earlier in the day, two policemen were martyred in an improvised explosive device (IED) attack in Bajaur.

Earlier this year, a policeman was martyred and 17 people injured in a blast near Balochistan University on the city’s Sariab Road.

Then-Balochistan government spokesperson Liaquat Shahwani said that a police truck deputed outside the varsity gate was targeted and an explosive device was planted in a motorcycle.