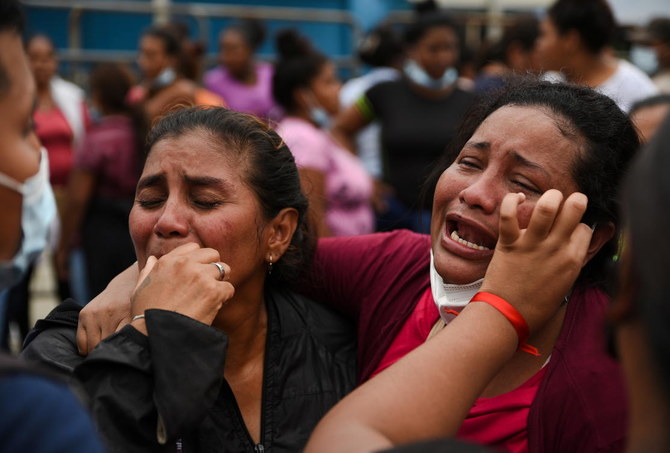 GUAYAQUIL: At least 68 prisoners were killed and more than two dozen injured in overnight violence at Ecuador’s Penitenciaria del Litoral prison, the government said on Saturday, in what officials characterize as fights among rival gangs.

The penitentiary, located in the southern city of Guayaquil, is the same prison where 119 inmates were killed in late September in the country’s worst incident of prison violence in recent history.

The government has blamed disputes between drug trafficking gangs for control of prisons for the violence.

Dozens were gathered outside the prison on Saturday afternoon waiting for news of loved ones, who many said they had not heard from since Friday afternoon.

Cristina Monserrat, 58, still has not heard from her younger brother who has been in prison for a year.

“What is happening inside is reprehensible, people killing each other and the saddest thing is they have no conscience,” said Monserrat. “My brother is alive, my heart tells me so.”

President Guillermo Lasso, Monserrat added, must do more to help the poor. Ecuador’s prison system has come under harsh spotlight in recent years for overcrowding and poor sanitary and living conditions for inmates.

Lasso in September declared a 60-day state of emergency in the prison system, which freed up government funding and allowed for military assistance in control of the prisons.

On Saturday, the president called on the constitutional court to allow the military to enter prisons, instead of providing only outside security. The court responded in a statement that a solution to the prison crisis will require more than temporary emergency measures.

Further disturbances in the penitentiary in the afternoon were under control by Saturday night, the government said, adding it was meeting with rights groups and the United Nations to handle the situation.