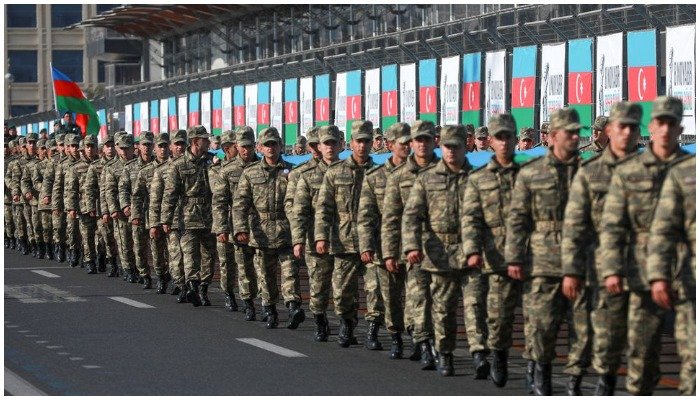 The clash was at its worst since the last year’s war between ethnic Armenian forces and the Azeri army over the Nagorno-Karabakh enclave.
Armenian defence ministry said its troops had come under fire from Azeri artillery, small arms and armour, media reported.
The Azeri defence ministry says it had launched a military operation to respond to “large-scale provocations” from the Armenian side.
MOSCOW: Armenia has asked Russia to assist their defence against Azerbaijan following a border clash in which, it said 15 of its soldiers had been killed, 12 captured, and two combat positions had been lost.

The fighting was the worst since a 44-day war last year fought between ethnic Armenian forces and the Azeri army over the Nagorno-Karabakh enclave which killed at least 6,500 people and ended in a decisive victory for Azerbaijan.

That conflict ended after Russia brokered a peace deal and deployed almost 2,000 peacekeepers to the region. Turkey took the side of Azerbaijan, which took back swathes of land it had lost in an earlier conflict.

In a series of statements carried by Armenian and Russian news agencies, the Armenian defence ministry said its troops had come under fire from Azeri artillery, small arms and armour.

It said 15 of its soldiers had been killed, 12 captured and that two combat positions near the border with Azerbaijan had been lost.

“Since Azerbaijan has attacked Armenia’s sovereign territory we are asking Russia to defend Armenia’s territorial integrity based on an existing 1987 (mutual defence) agreement between our countries,” the Interfax news agency quoted Armen Grigoryan, the secretary of Armenia’s Security Council, as saying.

Russia has a military base in Armenia as well as a peacekeeping force in Nagorno-Karabakh. There was no immediate response from Russia to the Armenian appeal.

The Azeri defence ministry said it had launched a military operation to respond to what it called large-scale “provocations” from the Armenian side and in a statement blamed Armenia’s military-political leadership.

It said Armenian forces had shelled Azeri army positions with artillery and mortar fire and that its own operation had been successful.

“The Azerbaijan Army has operational and tactical superiority,” it said in the same statement, saying it had targeted Armenian troops and hardware along the border.

“Armenian servicemen are leaving their positions in fear and panic. Military equipment belonging to the opposing side has been destroyed.”