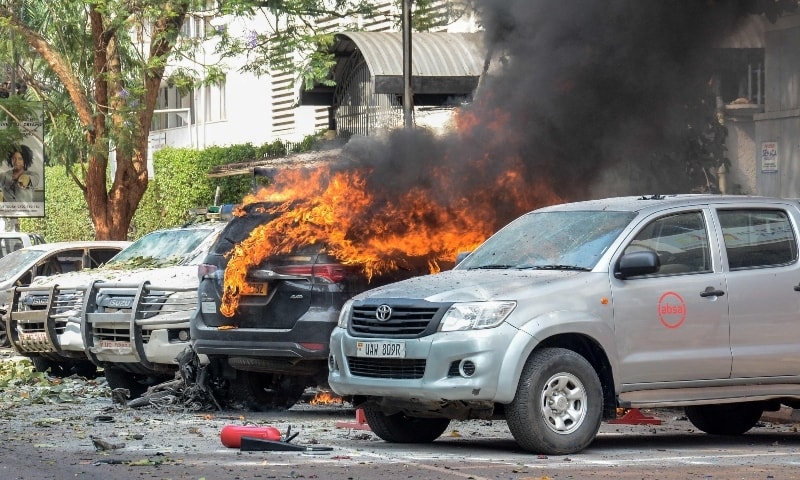 An armed group active in the eastern Democratic Republic of Congo, the ADF has been linked to the militant Islamic State group by Washington and blamed for a string of recent attacks in Uganda.

The explosions in Kampala’s central business district occurred within minutes of each other, shortly after 10 am, and left “bodies shattered and scattered”, he said.

There was no immediate claim of responsibility but Enanga told reporters: “The indications are that this is a domestic terror group linked to the ADF.” Police foiled a third attack, recovering an improvised explosive device from the home of an alleged suicide bomber who was shot and injured, and were in pursuit of other members of the group, Enanga added.

The explosion near the police station shattered windows while the one near parliament set cars parked nearby on fire, Uganda’s Assistant Inspector General of police Edward Ochom said earlier.

The Ugandan Red Cross said 21 of the 33 people injured were police officers.

The attacks follow two blasts last month — a bus explosion near Kampala that wounded many people and a bombing at a roadside eatery in the capital that killed one woman.

Police said both those explosions were carried out by the ADF. Uganda has also blamed the group for a foiled bomb attack in August on the funeral of an army commander who led a major offensive against Al Shabaab militants in Somalia.

Salim Uhuru, mayor of Kampala Central, said he was near the police station when he heard the blast.

“It was so loud. I ran towards the police station and saw one policeman I know dead on the ground. His body was scattered like mincemeat,” Uhuru said.