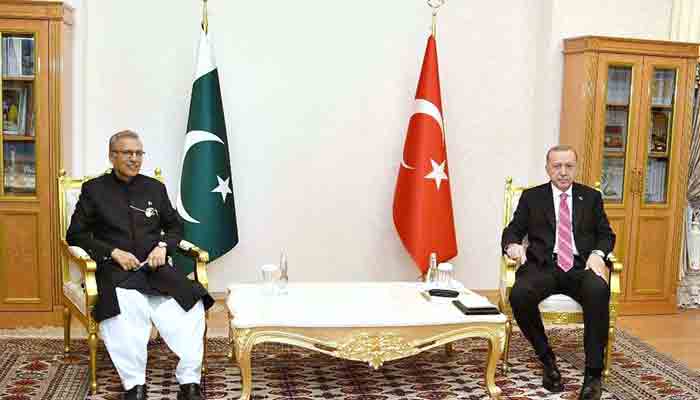 ASHGABAT: President Dr Arif Alvi Sunday said that despite having all elements for economic growth, the ECO region was among the least integrated regions in terms of trade and investment which necessitated unlocking of potential for an impetus to growth and development.

The president, addressing the 15th Summit of the Heads of State of the Economic Cooperation Organization (ECO) in Ashgabat, said the intra-regional trade among ECO members was only eight per cent of their total trade.

“Unlocking the potential for regional integration will provide significant impetus to growth and development in all ECO member states… The ECO region has all the elements needed for economic integration and rapid economic growth: rich resources, enterprising people, geographical contiguity, and a common culture and heritage,” he said.

However, he said for historical reasons, the ECO was among the least integrated regions in terms of trade, investment, finance, infrastructure, regional value chains, labour mobility and social integration. Themed ‘Into the Future Together’, the summit was chaired by President of Turkmenistan Gurbanguly Berdimuhamedov and attended by heads of ECO member states and Secretary-General Ambassador Khusrav Noziri. The president congratulated President Berdimuhamedov, for assuming Chairmanship of the 15th ECO Summit and hoped that under his “wise guidance”, the member countries would be able to successfully realise the objectives of this ECO Summit.

He also thanked President Recep Tayyip Erdogan and Secretary-General Noziri for successfully organising all events of the 14th Summit during challenging times of the COVID-19 pandemic. The president viewed that in order to stay competitive, national and regional economies would have to move towards greater physical and virtual integration.

“Such integration is imperative for the ECO region. The theme you have chosen for this Summit – “Into the Future Together” – is thus most apt and timely.” The president called for ensuring the implementation of ECO Vision 2025, and the Islamabad Declaration, a free or preferential trade arrangement; strengthening of regional institutions such as the ECO Trade and Development Bank (ETDB) and operationalisation of the ECO Reinsurance Company (ERC). Calling peace in Afghanistan as “key to connectivity”, the president said after the end of the 40-year war, the country had a humanitarian crisis and the specter of economic collapse looming large over its people. He said the situation could also lead to exodus of refugees from Afghanistan. For four decades, Pakistan has hosted nearly 4 million Afghan refugees.

He said besides urgent humanitarian assistance, the countries must render help to the Afghan people in the key sectors of health and education. “Our strategy of ‘smart lockdowns’, the strategy of compassion, generous social protection, and strategic economic stimulus have saved lives and livelihoods and restricted the damage to our economy.”

The president called upon the ECO states to join other developing countries in promoting a common development agenda to return to the path of sustained and sustainable growth. “As the next Chair of the Group of 77 and China, Pakistan will propose such a development agenda, including debt restructuring, redistribution of the $650 billion new SDRs to developing countries, larger concessional financing, mobilisation of the $100 billion in annual climate finance by the developed countries, ending the billions in illicit financial flows from the developing countries and the return of their stolen assets, and the creation of an equitable and open trading system and a fair international tax regime,” he told the ECO leaders.

He also invited the ECO Member States, also the members of Organisation of the Islamic Cooperation (OIC) to attend the next OIC Foreign Ministers Conference in Islamabad on 23rd March next year – when Pakistan will celebrate 75 years of its independence. The president also congratulated President Aliyev on the recovery of Azerbaijan’s territories from foreign occupation.