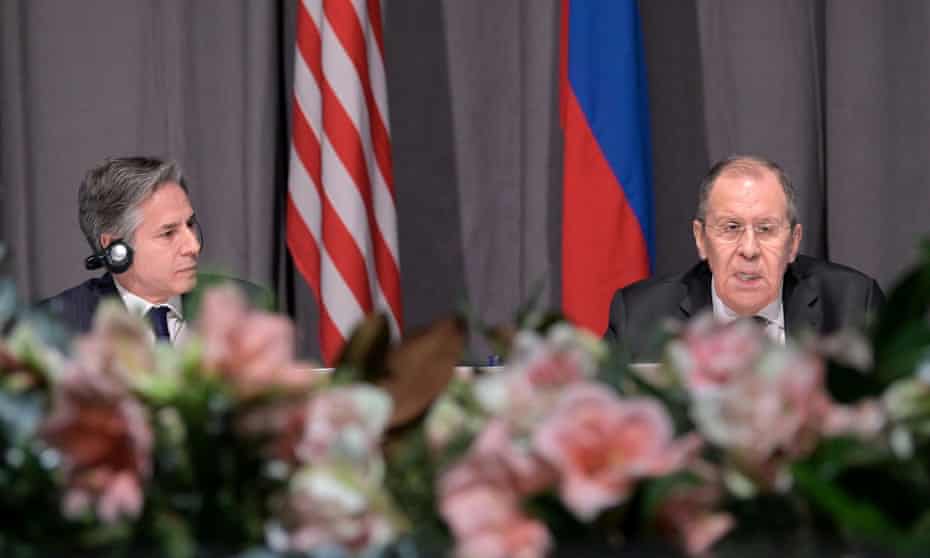 Joe Biden and Vladimir Putin are due to hold talks “in the near future” after their top diplomats made no apparent progress in Stockholm towards defusing a standoff over Ukraine, amid fears of a Russian invasion.

The US secretary of state, Antony Blinken, and the Russian foreign minister, Sergey Lavrov opted not to make a joint appearance after trading threats during a 40-minute meeting whose short duration indicated there was little chance of a breakthrough.

“We had a very direct, very candid, non-polemical exchange of views,” Blinken said afterwards. “It was serious; it was sober. I believe that the foreign minister will take the conversation back to president Putin. I’m going to do the same, of course, with president Biden. And I think it’s likely the presidents will speak directly in the near future.”

The US has threatened to deploy “high-impact economic measures” if a Russian buildup of an estimated 100,000 troops leads to a larger conflict with Ukraine. Moscow has said that it feels threatened by Nato’s close relationship with Kyiv.

In a bellicose statement following the talks, Russia’s foreign ministry threatened to take “retaliatory measures” if its interests were ignored. “Ignoring Russia’s legitimate concerns, Ukraine’s involvement in US geopolitical games amid the deployment of Nato forces near our borders will have the most serious consequences, and will force Moscow to take retaliatory measures to level the military and strategic balance,” the ministry wrote.