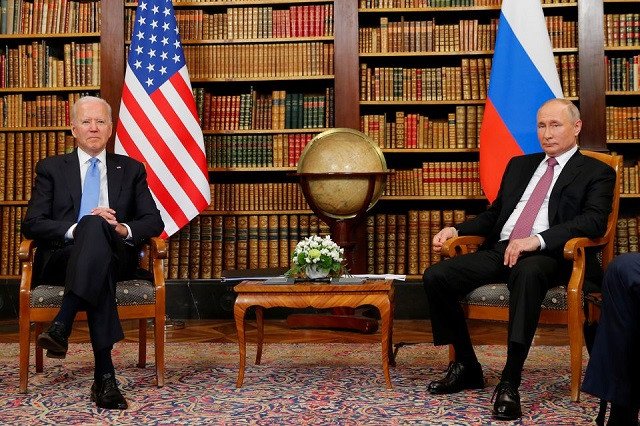 MOSCOW:
The Kremlin on Monday described the state of US-Russia relations as ” quite lamentable” on the eve of a video call between President Vladimir Putin and his US counterpart Joe Biden when the two will discuss tensions around Ukraine.

US officials have in the last month pointed to unusual Russian troop movements near Ukraine and raised concerns over what they say is a possible Russian invasion, something Moscow has dismissed as fear-mongering.

Kremlin spokesperson Dmitry Peskov said that what Russia regards as NATO’s creeping expansion towards its borders and long-term security guarantees, which Putin has said Moscow needs from the West, would be in focus on Tuesday’s call.

Putin has said he wants legally-binding guarantees that NATO will not expand further eastwards and a pledge that certain types of weapons will not be deployed in countries close to Russia, including Ukraine.

Putin is expected to raise the possibility of holding another US-Russia summit with Biden too. The two men last met at a summit in June in Geneva.

“They will need to discuss how the understandings they reached in Geneva are being implemented, to review what is being fully implemented, and what needs extra work,” Peskov told reporters.

“Of course it (the agenda) is bilateral relations, which remain in quite a lamentable state. And then it’s the questions that loom large on the agenda. Primarily tension around Ukraine, the theme of NATO advancement towards our borders, and President Putin’s initiative about security guarantees.”