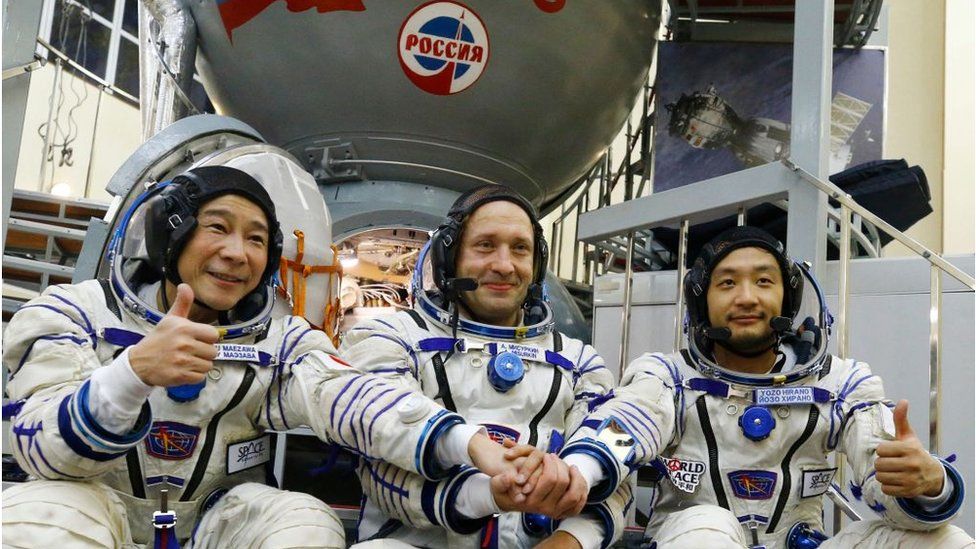 on launch day, Maezawa and his crew left their hotel in Baikonur to a Soviet-era song played for all cosmonauts before their flights. The song, about cosmonauts missing home, was sung partially in Japanese.

Maezawa’s family and friends – some holding Japanese flags – waved him off as he was driven to get his spacesuit fitted.

“Dream come true,” the tycoon tweeted before he and Hirano boarded a three-seat Soyuz spacecraft piloted by the Russian cosmonaut Alexander Misurkin in the run-up to their launch from the cosmodrome in Kazakhstan.

“I’m excited,” he told reporters on the eve of his 12-day journey. “I feel like an elementary school student about to go on an outing. I didn’t think I would be able to go to space. I used to like the starry sky and heavenly bodies. I feel fortunate to have this opportunity and to finally fulfil my dream.”

The 46-year-old used social media to chronicle the 100 days he spent preparing for the mission, saying he had enjoyed the experience of induced weightlessness on an adapted plane, but confessing that sitting in a spinning chair had been “like torture”.

He and Hirano, a film producer, will document daily life on the space station, where the entrepreneur will perform 100 tasks for the tycoon’s YouTube channel, which has more than 750,000 subscribers.

Maezawa, who sold Zozo to SoftBank in 2019, will follow his ISS mission by becoming the first private passenger on the moon voyage aboard the SpaceX rocket.