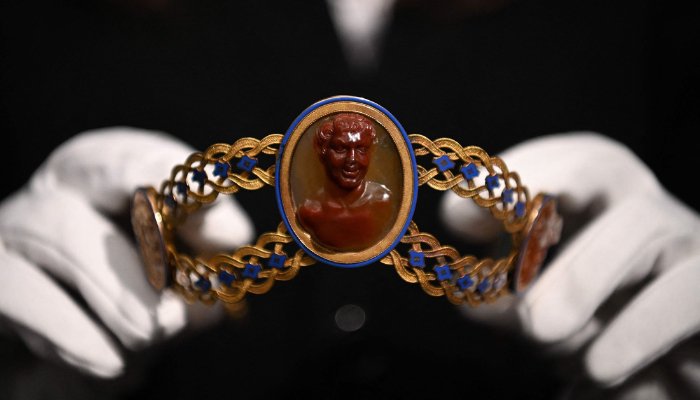 Two tiaras, believed to have belonged to French Emperor Napoleon Bonaparte’s first wife Josephine, sold for more than $760,000 at auction on Tuesday.

Set with engraved gemstones, the early 19th century pieces are part of matching jewellery sets, or parures, and were offered as part of auction house Sotheby’s Treasures sale.

It was offered with a pair of earrings, hair comb and belt ornament.

“It’s a very rare example of early near classicism jewellery… believed to have been worn and owned by Empress Josephine Bonaparte,” Kristian Spofforth, head of the London jewellery department at Sotheby’s, told Reuters ahead of the sale.

“It’s a wonderful tiara set with incredible… carnelian intaglios representing classical scenes. This symbolism was very important to Josephine and Napoleon in the period,” he said.

“The revolution had passed, and Josephine and Napoleon wanted to reinvent themselves in this classical style.”

The second gold and enamel tiara featuring five head cameos of Zeus, Dionysus, Medusa, Pan and Gaia of ancient Greek mythology, sold for 126,000 pounds, within its estimate range of 100,000-200,000 pounds.

It was offered with a belt clasp and belt ornament. – Reuters