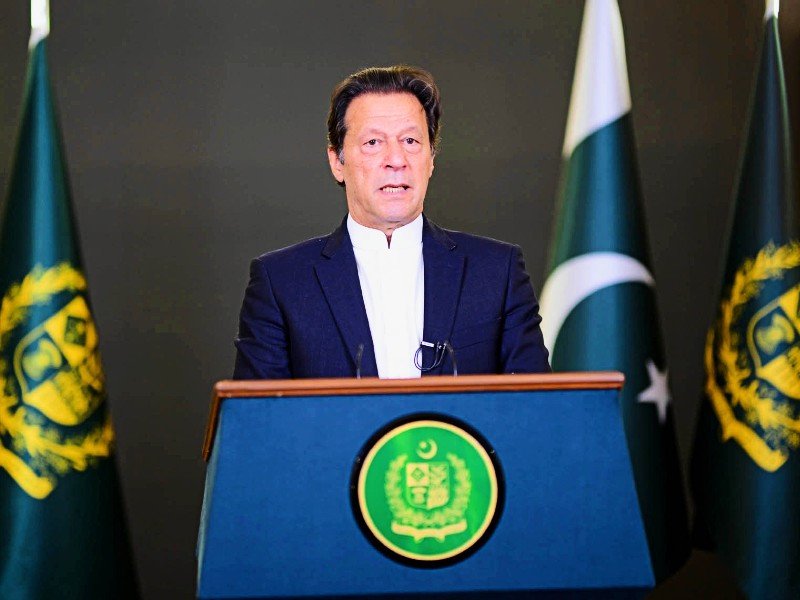 ISLAMABAD:
Prime Minister Imran Khan on Thursday said that Pakistan does not want to take any sides in the US-China ‘cold war’ but instead wants to reduce the growing tensions between the two.

Addressing the Islamabad Conclave 2021, which was themed ‘A Peaceful and Prosperous South Asia’, PM Imran stated that “deteriorating US-China relations, which are heading towards a cold war-like situation, is something Pakistan needs to stop.”

“We should not be in any bloc,” he maintained, recalling the previous Cold War, where joining a bloc was not beneficial for Pakistan.

The premier’s remarks come a day after Islamabad decided to skip the summit on democracy being convened by US President Joe Biden on December 9 and 10.

The Biden administration has invited leaders from over 100 countries. Pakistan was among only four countries from South Asia that were invited to the summit. Others include India, Maldives and Nepal.

China and Russia were excluded from the invitees while Taiwan was extended the invitation, drawing a strong reaction from Beijing.

Addressing the conclave on Thursday, PM Imran said that Pakistan played a “big role” in bringing Iran and Saudi Arabia together and wants to reduce the growing tensions between US and China as well.

“Pakistan wants to hold talks with America and China as we did during the 1970s,” he stated.

While there has always been competition between countries for trade, Pakistan does not want the current situation to escalate to the level witnessed in the first Cold War, warned the premier.

Talking about the prevalent Afghan crisis, PM Imran delineated that the situation could have been “much worse had a civil war broken out.”

“We are trying our best to inform the world that in spite of their like or dislike for the Taliban, the primary concern should be the 40 million Afghans, and what they will have to undergo if the current situation persists,” the premier remarked.

Peace in the war-torn country, he emphasised, was important for Pakistan, especially in light of this country’s geo-economics goal.

“All central Asian republics wish to have interconnectivity with Pakistan and trade through Gwadar. Peace in Afghanistan is very important for connectivity,” he said.

The premier also highlighted that South Asia was held “hostage” by the Kashmir issue.

He claimed that his government “tried very hard” to hold talks with Indian Prime Minister Narendra Modi but to no avail.

“I slowly realised that he [Modi] thought our efforts for peace were a sign of weakness,” he said, adding that Islamabad was trying to negotiate with the RSS ideology and not an ‘ordinary’ Indian government.

He further said that this ideology was not just the misfortune of Pakistan and Kashmiris, but also of the myriad of Indian minorities, who are excluded by the “Brahmin RSS ideology”.

“Never in human history has such a large chunk of population been deemed as second-class citizens,” he said, adding that the ideology will create severe repercussions for the Indian society.

The premier maintained that his government was the first to flag climate change when it planned the One Billion Tree Tsunami project in Khyber-Pakhtunkhwa.

“We knew 20 years ago that this was a threat when no one had perceived it,” he said, adding that Pakistan was one of the top 10 countries which were most vulnerable to the effects of climate change.

He further stated that India too was susceptible to climate change, especially as most of their water came from the Himalayan glaciers, which were rapidly melting.

He reiterated that “our futures” were connected and climate change needed to be combatted together.

“But I have not seen seriousness in world leaders because their commercial interests clash with the steps necessary to curb climate change,” he said.

“Pakistan is trying its best to combat climate change and is being appreciated globally. However, regions are connected and develop together,” he said, adding that he prays the Indian government will logically talk to Pakistan in this regard.

The premier claimed that the climate issue in Lahore, for example, could not be solved until both the countries came together as pollution cover could be seen over Punjab and Dehli as well.

Need for think-tanks in Pakistan

The premier stated that the country “desperately needed” think-tanks to communicate the positive image of Pakistan to the world.

“It really pains me when think-tanks in America define Pakistan as a country of extremists, especially after 9/11, without knowing much about us or our culture,” he said.

“We have never had a cohesive response to this propaganda,” said the premier, adding that there was a dire need for a well-thought-out view regarding the country.

Speaking at the occasion, Foreign Minister Shah Mahmood Qureshi said we need to put human security at the centre of national security strategies as a departure from security-centric policies in efforts to move the region towards development and prosperity.

“Pakistan has shifted its focus to geo-economics and connectivity is the new buzzword. It can provide us with enormous opportunities for national and regional development,” he said

FM Qureshi said that regional cooperation is a must for South Asia to prosper.

He emphasised that Pakistan has decided not to be a part of any global or regional conflict, and has chosen to be a partner only in peace and development.