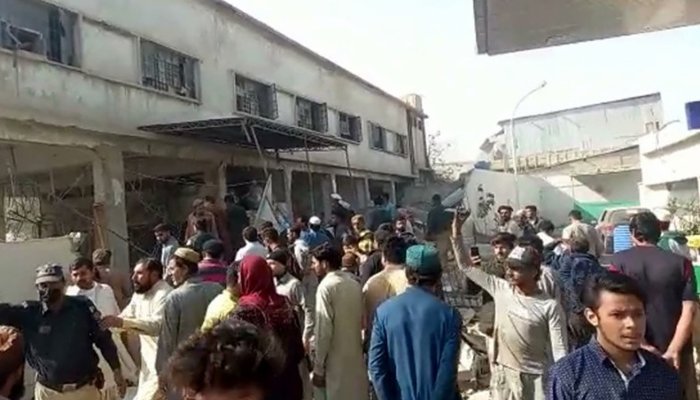 KARACHI: A powerful explosion took place in the city near the Paracha Chowk area of Shershah, killing at least 14 including the father of PTI MNA Alamgir Khan, Geo News reported Saturday.

Fears of increasing casualties remain with the search and rescue operation underway.

Meanwhile, DIG South Sharjeel Kharal said 10 injured people have been discharged after necessary medical treatment, while six remain under observation, including two who are are on the ventilator.

A spokesperson for the Karachi Police, quoting the bomb disposal unit’s report, said the blast took place in a gas pipeline running through a nullah located in the area, causing immense damage to the building of a private bank that was constructed atop it.

The spokesperson noted that so far, there was no lead suggesting that the blast might be linked to terrorism.

Sui Southern Gas Company (SSGC), in a statement, said that its team had confirmed that there was “no SSGC gas pipeline” in the area. “The gas pipelines installed in the area are safe and they have not incurred any damage.”

Referring to the BDU’s report, the SSGC said that it had declared a blast in the sewerage line as the reason for the explosion.

“It is important to note that neither were flames visible nor was there any smell of natural gas in the area — which is a clear indication that the blast is not linked to any of SSGC’s pipelines,” it added.

DIG South Kharal said police have obtained CCTV footage of nearby places — the bank and an office.

The police official said that a forensics team also obtained samples from the debris, and that the overall scope of the investigation had been extended.

“A clearer picture of what happened will be before us by tonight,” he added.

Eyewitnesses on the spot claimed that many people were buried underneath the debris of the building.

An eyewitness, speaking to Geo News, said that since it is a Saturday, only nine employees of the bank were reporting for duty.

He said the bank was about to shift to a new place but it was “our bad luck” that the blast took place before the branch could be shifted to the new location.

The eyewitness said that there were a few bank customers who were buried beneath the debris as well.