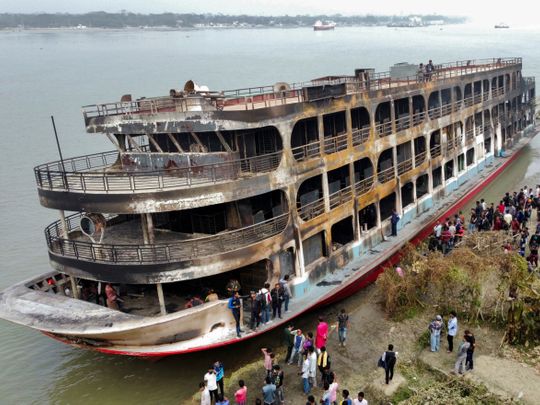 Bangladesh police on Monday arrested the owner of an overcrowded ferry that caught fire and killed at least 39 people last week after investigators blamed the toll on a disregard for safety.

The blaze broke out in the middle of the night on Friday when many of the ferry’s 700 passengers were sleeping near the southern district of Barguna.

Survivors relayed harrowing stories of having to jump into the Sugandha river from the three-story ferry, which was only designed to carry 420 people.

Most of the victims burnt to death while others drowned in frigid waters while trying to escape.

Ferry owner Hum Jalal Sheikh was arrested Monday, a police spokesman told reporters, a day after a court issued an arrest warrant for eight people including the captain and crew of the Obhijaan-10.

Marine police officer Mahbubur Rahman said the vessel did not have adequate fire extinguishers and buoys to face a major mid-river accident.

“We spoke to the survivors and they said the driver of the ferry kept the vessel moving for nearly an hour after its engine room caught fire,” he told AFP.

“Had they stopped the ferry and anchored immediately, it could have saved all these valuable lives.”

At least 21 people were killed in August when a boat packed with passengers collided with a sand-laden cargo ship.