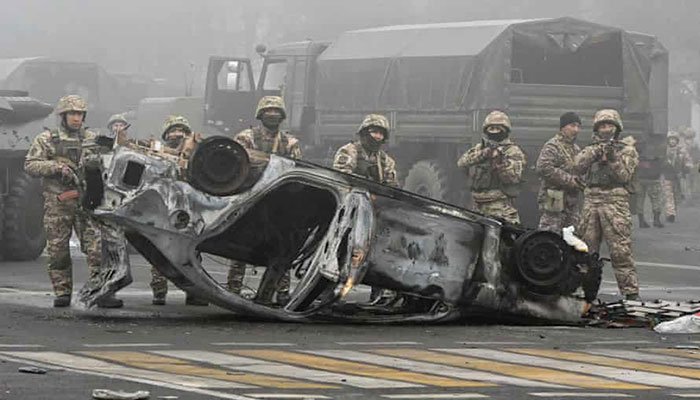 New bursts of gunfire could be heard in Kazakhstan´s largest city Almaty as security forces fought to put down unprecedented unrest. Under increasing pressure, President Kassym-Jomart Tokayev appealed overnight to the Russia-dominated Collective Security Treaty Organisation (CSTO), which includes five other ex-Soviet states, to combat what he called “terrorist groups” that had “received extensive training abroad”. Within hours the alliance said the first troops had been sent — including Russian paratroopers and military units from the other CSTO members — in its first major joint action since its founding in 1999.

“Peacekeeping forces… were sent to the Republic of Kazakhstan for a limited time to stabilise and normalise the situation,” the CSTO said. The CSTO´s current chairman, Armenian Prime Minister Nikol Pashinyan, earlier announced the alliance would agree to the request, saying Kazakhstan was facing “outside interference”. Footage released by the Russian defence ministry showed military transport planes being loaded with troops and armoured trucks before taking off from a snowy runway for Kazakhstan.

Tokayev said in a televised address early Thursday that “terrorists” were seizing buildings, infrastructure and small arms, and battling security forces. Military forces had deployed en masse in the streets of Almaty and were firing live rounds, according to footage shown Thursday on Russian television.

Videos on social media showed pillaged shops and burned buildings in Almaty, automatic gunfire in the streets and residents screaming in fear. Officials said more than 1,000 people had been wounded in the unrest, with nearly 400 hospitalised and 62 in intensive care.